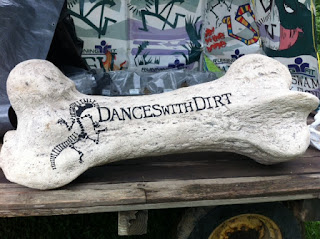 Last year, a friend and I ran the half marathon at Dances with Dirt in Gnawbone Indiana. It was AWESOME! We tromped our way through a great race and got to cheer in all of  our friends. A magic running day. So, on this magic running day we hatched a plan.... 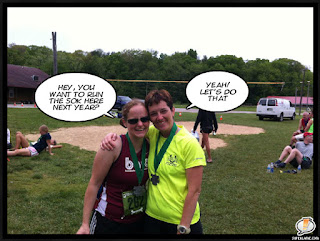 And that was that. For a year I told everyone. I said it so many times it became less scary. I trained for it, managed a huge flair up of Plantar Fasciitis during it, and as it got closer and close, I still couldn't believe that it was actually going to happen.
Race day!
I never sleep well on race day. But thankfully the night before this race, I slept like a baby. Our race start time was 6:15, so we got to the venue at about 5:50. Enough time to apply some glide, tie my shoes, hit the port-o-lets, hug my friends and get to the starting line.
And we were off! Our friend that had done TONS of training with me took off at lightening speed. We knew she would and were thrilled to see her take off. But we found that as the race wore on, we wished we had planned to carry radios or some sort of signaling device to know that she was having a good race!

I had my heart rate monitor on and I was so nervous and wound up that the alarm for my heart rate wouldn't stop going off! Some woman behind us said, "what's with all that beeping?" I told her it was the miles clicking off on my Garmin, we ARE killing it! This is funny to think about, but even funnier because we were slogging up a muddy, mucky horse crap covered trail at a whopping 18 minutes per mile. No miles were clicking off, trust me.
We finally got off the half marathon course and that's when I felt like this was really happening. I had spent quite a bit of time training on the race course, so I had a really good feel for what the first 18 miles were going to be like. And from every race report I read, I knew that in the last 13 miles, things got ugly.
So the first 18 were really good. Saw a friend working an aid station at mile 10. We felt strong and were comfortable on the trails, we at least knew them a little. I was fighting nausea every time I ate or took an electrolyte pill. So, that wasn't fun. I tend to have occasional nausea problems when I run, but I found myself dreading my next gel. So by the time I was due for a third gel, I ate half a Lara Bar instead and it went over much better with the guts. I backed off on salt pills for a while to try to let my guts settle down a bit.
At mile 18 there was a great aid station with music. A group of 3 that we had been chasing were there and we got to say hello and wish them well. We had heard them off and on all morning, but with the constant switch backs and tree foliage, we couldn't tell if they were in front of us or behind us, but we COULD tell that they were a lively bunch and having a BLAST. As the lovely fella at the aid station filled up my Camelbak he said, "there was a gal that came through here not too long ago and her hands were so swollen I had to help her open hers!" I immediately knew it was our running partner that had zoomed ahead! She gets some serious hand swell and always has problems opening her Camelbak. Yeah! It was like we knew she was doing ok. Then one of the volunteers says, " 3 miles to the next aid station, and then 10 more miles and you're done!" I told him that I loved all of those words and then ran at him and hugged him. What a sweet guy. He didn't even flinch. Just gave me a hug and laughed. The volunteers at this race are amazing. A-MAZ-ING!
Running Running Running and Running.... then we got to the much talked about bushwacking. Being slow pays off because the fasties had matted down the trail for us rather nicely. But it was lots of climbing over trees, sliding down muddy hills, crawling under a tree at one point. I don't know how many times I thought to myself
Well this is just stupid.
And just as we were climbing a huge hill... I see someone coming up behind us, fast! It turns out our friend Ben was having an AMAZING day and was now lapping us (the 50 mile course does two laps of the 50k course). This is the guy that's constantly trying to convince me to run farther and farther. The hill (maybe it was a mountain) that we were climbing was so steep that even he had to walk a bit so we got to chat with him a bit and send him on his way (when I say he had an amazing day, for once I'm not exaggerating. A course record! I like to think that it was all because he ran into my friend and I with 12 miles to go). 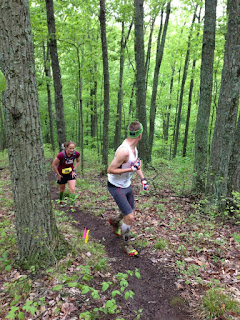 There was a really dumb part where you got to a wall of mud that was straight up and you had to... go up it. Seriously? For that moment the race turned in to an upper body workout where you grabbed through mud trying to find roots to hold and haul yourself up. Kind of fun, but kind of this is stupid. My friend was waiting for me to get up and I told her, "don't grab that shrub, its got briars". The gal climbing up behind us did not hear that warning... we heard her shouting as we trudged up the rest of the hill/wall of mud.
We also knew there was a giant staircase we would have to deal with. But by the time we got to it, it seemed so easy compared to the muddy hills we had been dealing with. Onward! There was some awful road running mixed in that felt extra miserable. It NEVER seemed to end. But, we were able to gain a bit of speed.
Then the goal was just GET TO THE SKI SLOPE! You see, in this race, you run down an unused ski slope. It's not as fun as it sounds, but we knew if we could get there, we'd be a mile away from the finish. We got to the ski slope, shimmied down the mud slide at the top by holding onto a tree and then started the painful trot down. At one point I ran through a small briar bush because I couldn't stand the idea of the one extra step out of my way to get around it. We then got to tromp through a freezing cold creek that felt amazing on my giant swollen sausage feet.
Ben was waiting for us at the top of the creek (he had plenty of time to claim his victory, change clothes and probably eat 7 meals). He ran us in for a bit and then we were hit with the wall of sound/cheering that can only come from the best running group and group of friends ever! Some of these people had finished their races HOURS before we rolled in. And some had been volunteering since 5! I cannot express how fortunate I am to have such wonderful people in my life. We got our medals and miracle of miracles I got an age group award!!! Now to be fair my, my age group had 3 finishers in it. BUT! For a gal that is always the back of the pack. An age group award is a pretty sweet bit of icing on the first ultramarathon cake.... 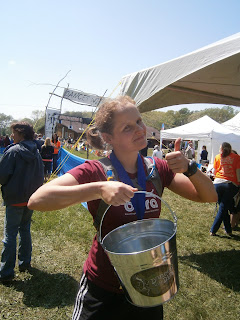 Man, that race was stupid. It was awesome. It was magic. And it was awful. I'm so happy I did it!
And what makes it extra cool? Having my awesome husband to get me beers, all my friends that finished their races 735 hours before I got done wait around to cheer, and a year later... 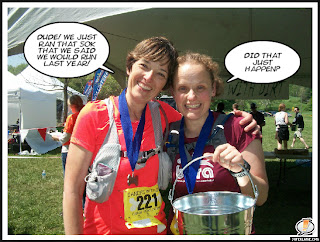 Now I've done a 50k. That's pretty cool. Will I do another? I can only assume that the my constant reference to this race as my FIRST 50k will probably provide the answer.

Oh my lord. DO THIS RACE!

Posted by Persistent Runner at 12:17 PM